This Baked Apple Cider Donut Muffin Recipe is an easy and quick way to still enjoy the traditional fall favorite without the mess, hassle, and calories of frying.

This post contains affiliate links. This means, if you click a link and make a purchase, I may earn a small commission at NO EXTRA cost to you. I greatly appreciate any and all support. ❤️

Thankfully, there is an easy and quick way to enjoy the same taste and experience at home in the form of...

I’ve been wanting one for awhile. They just seem so expensive. You can definitely make this recipe in a donut pan though. This Wilton Non-Stick 20-Cavity Donut Baking Pan seems to be the best value that I’ve found so far. It won’t fit in my oven though. 😂

Soooo, I decided to bake my apple cider donuts in a mini angel food cake pan. This is how they came out:

They weren't the best looking “donuts”, but omg, they tasted DELICIOUS.

They also reminded me of muffins. Moist, soft, tender muffins. So, I made the recipe again with a cupcake pan. Best decision ever.

For some reason, using a cupcake pan results in Apple Cider Donut Muffins that have a slightly crisp outside like traditional apple cider donuts.

You get to enjoy the fall classic with none of the mess, hassle, or calories of frying!! Or needing a donut pan!

I’m a huge fan of Wilton products for baking. I use this Wilton Perfect Results Premium Non-Stick Bakeware Muffin and Cupcake Pan. It has 12 cups, which is exactly what this recipe fills.

The MOST Important Tip for Tasty Apple Cider Donut Muffins

I admit I really, really did not want to do this. I hate extra steps. My recipes are usually very simple.

BUT, to actually taste the apple cider in apple cider donut muffins, you need to reduce it.

This is easily done on the stove. You can even do it beforehand then store it in the fridge. You have to let it cool down before adding it to the batter anyway.

Reducing the cider results in a more potent flavor while removing excess liquid (the water evaporates).

How to Reduce Apple Cider

To do this, pour the apple cider into a small saucepan. Simmer on low heat without a cover. Stir occasionally.

For this recipe, it took about 25 minutes to reduce 2 cups of apple cider into 1 cup.

Let cool completely before using it in the batter.

How to Add a Cinnamon Sugar Coating

I only added the cinnamon sugar mixture to the top of my muffins. You can do the entire muffin though. It’s super easy.

When the apple cider donut muffins are completely cool, mix granulated sugar and cinnamon then melt some butter.

Brush the butter onto the muffin wherever you want the cinnamon sugar to stick. I use my finger to do this. Please don’t use your finger if the butter is crazy hot though. I don’t want anyone to get burned or singed or feel any discomfort in any way.

You could also use a brush to apply the butter. Dipping the muffin isn’t the best way. I tried this… it resulted in soggy muffins. 😂

After applying the melted butter, dip and roll the muffin in the cinnamon sugar mixture. You could also shake the mixture onto the muffin. I recommend doing this over another plate or bowl though.

I did this for my first batch and they were just as AMAZING.

Just make sure that the gluten-free flour that you use already contains xanthan gum. It helps to hold gluten-free baked goods together.

Looking for another simple Fall Recipe? Check out this Easy, Homemade Pumpkin Cake with the BEST Cream Cheese Frosting. 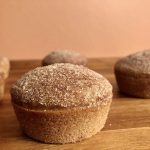 For the Cinnamon Sugar Topping:

If you tried this recipe, let me know what you think in the comments! You can also tag my on Instagram @lovemischka. I love seeing you bake!