This blackberry buttercream frosting recipe is fresh, sweet, and tangy. It makes a BEAUTIFUL frosting for your favorite cupcakes, a delicious addition to layered cakes, and the perfect filling for macarons.

This post may contain affiliate links. This means, if you click a link and make a purchase, I may earn a small commission at NO extra cost to you. Thank you. ❤️

I’ve been having a little obsession with buttercream. I absolutely LOVE to watch piping videos on TikTok. They’re so relaxing!

This fresh blackberry buttercream is bright in flavor and look. It creates beautiful cupcakes that are perfect for a baby shower, bridal shower, or any spring and summer celebration. It’d even work in wedding cakes!

I decided to make this blackberry frosting with fresh blackberries instead of blackberry jam.

The fresh berries add such great flavor that’s hard to get with jam.

They make a buttercream that is bright, refreshing, sweet, and tangy. Perfect for spring, summer, or as a pick-me-up after a long day.

This recipe can be used with other kinds of berries as well. Simply replace the blackberries with a berry of your choice, like fresh raspberries!

The first step is to make blackberry puree. This is very simple, I promise.

Add 1 cup of blackberries and 2 Tbsp of lemon juice to a small saucepan.

Over medium heat, bring the mixture to a simmer while stirring often.

Keep simmering for about 20 minutes. Then strain the pureed blackberries in a fine mesh strainer to discard seeds.

After this, there should be around 1/4 cup of fresh blackberry puree. It’ll look more like blackberry juice.

Allow to cool to room temperature before using.

Save and organize your recipes with this adorable recipe card printable.

Tips for the BEST Buttercream

I originally made this frosting to go on my Earl Grey Cupcakes. They were delicious! The recipe should be up soon.

The second time, I piped it on my Lemon Cupcakes from Scratch. The combination is one of my favorite things. SO bright and refreshing. Lemon cupcakes with blackberry buttercream are the best spring dessert.

Next time, I want to make blackberry cupcakes or a blackberry cake to pair with this frosting. It’ll be a great use of blackberry season! 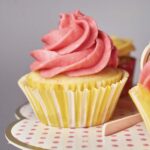 Did you make this blackberry buttercream frosting? What did you use it with? Would you like to see more flavored buttercream recipes? Like this orange buttercream? Let me know below!